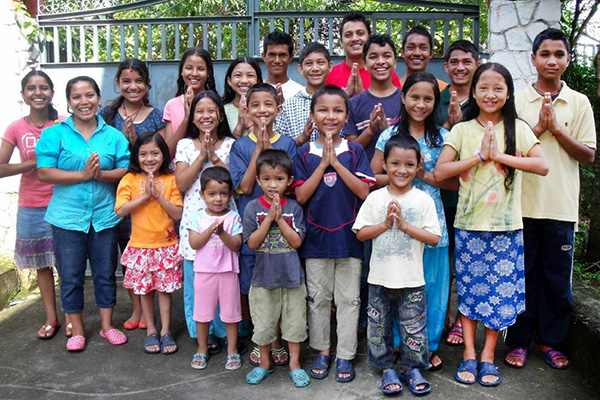 The orphanage was established in the year 2000 by Thak and Ghanga Bahadur.

Martin Bauer, the owner of mb-Vermarktung, has supported the orphanage since 2001 on his own private initiative. In 2010, the organization moved into its new building, financed and built with assistance spearheaded by Martin Bauer. The private institution is now home to 30 orphans between the ages of 1 and 19. In the aftermath of the 2015 earthquake, our association also took on schooling and training sponsorships for 14 needy children and covering the health care costs for the children.

The organization receives no governmental funding whatsoever and exists solely on the basis of private monetary donations.

Since 2012, nearly 40 percent of subsistence food needs have been produced by the orphanage’s own small ecological farm, set up with the help of Martin Bauer. Two cows provide the home with milk and yogurt. In addition, their manure “feeds” the newly-created biogas plant, which produces gas for cooking. A small photovoltaic plant has been supplying electricity to the orphanage since 2014.

After completing school (usually at age 16), the children continue to receive guidance in the children’s home, until the end of their subsequent apprenticeship. In addition to school education and vocational training, the children are taught methods in ecological farming in many workshops by Ganesh, our organic gardener.

When some of the youths returned to their home villages after training, they also have the opportunity to improve the yields of their own farming and to pass on their knowledge to others.

What’s more, in the orphanage’s own woodworking and metalworking shops, they receive basic instruction in these trades.

In a specially established women’s workshop, women from the surrounding area have the opportunity to produce handcrafted sewing to sell to tourists and thus supplement their household income. Through their active help, the children from the orphanage benefit from the knowledge and abilities of the women.