“Sometimes I negotiate with myself “

Martin Bauer has found his vocation in the combination of organic farming and business. The 50-year-old, who likes to describe himself as a “bridge builder”, got to know both early on: on the one hand, living close to nature in the countryside, picking up potatoes at his grandmother’s place, and on the other hand, the world of profits and losses in the business high school. Even later, he commuted between business and organic farming: after completing a civil service on an organic farm where he got trained as farmer, he was later drawn more towards the business side. He graduated as agricultural engineer with a specialisation in economics and social affairs, or “agricultural economics”, as Bauer calls it.

As a mediator in the meat market

After some time as an employed consultant, Bauer felt the need to become his own boss and founded mb-Vermarktung in Schwäbisch Hall in 2009. His concern is “the best possible matching of supply and demand“. With his five employees, Bauer establishes trade relationships and networks between producers and buyers in eleven countries, mainly for organic poultry products. For the slaughterhouses he is the sales department, for many customers he is the purchasing department. “Sometimes I negotiate with myself“, he says with a wink, but also in these occasions he does not face any problem. “For me, the outcome of negotiations does not depend on who has the upper hand.” One result of negotiations is acceptance, ideally the balancing of all interests. Between the sausage industry and slaughterhouses, he never loses sight of the organic farmers. Success proves Bauer right. He is unrivalled in Europe, at most smaller regional organic meat dealers, he says, still exist.

His business model is based on the trust he has earned over the years in the industry. Moreover, Bauer’s company is inspected several times a year, often without prior notice. “Controls are good, they strengthen confidence in the products,” he says with certainty. In addition to the national organic controls, he has his foreign suppliers certified by a German control company at his own expense. “Some suppliers could buy directly by the slaughterhouses, but they do it from me because they trust my company and the way I work.”

With the founding of mb-Vermarktung, Bauer has sided with business, crossing a “red line”, as he calls it himself. Has he never wanted to buy or lease an organic farm and run it himself? There would have been opportunities, for example before studying, but he never wanted to take them. It was not his. Nevertheless, the entrepreneur now benefits greatly from his knowledge of organic and sustainable agriculture. There aren’t many people who speak so competently about the subject, and his partners appreciate that. You can talk to Bauer about a lot, and also philosophise, for example about why 70 to 80 percent of those surveyed say they buy organic goods, but the organic market share is only around five percent. But at least, according to Bauer, there would be double-digit growth rates. 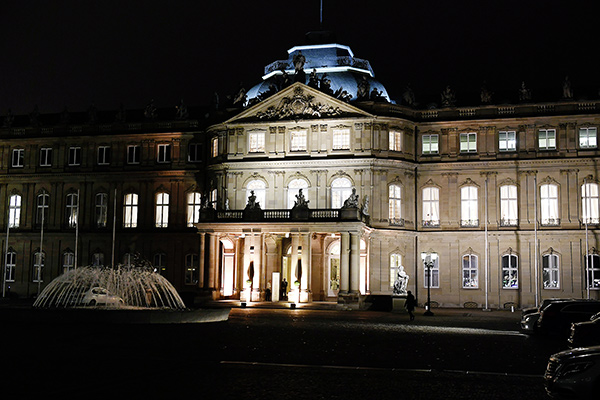 The new castle in Stuttgart 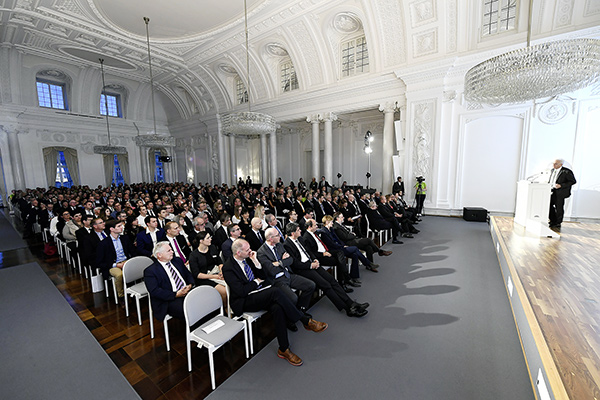 a nice setting for the award ceremony.

604 candidates – more than ever before – applied for the state prize for young companies this year. 20 of them were nominated for the award given by the Baden-Württemberg state governement and the L-Bank. Finally, the top 10 got awarded on the October 25, 2016, in the new castle of Stuttgart by Prime Minister Winfried Kretschmann and Dr. Axel Nawrath, Chairman of the Board of Management of the L-Bank.

“When we honour the best young companies in 2016, we are honouring innovation, creativity and, in particular, the courage to be self-employed. This is an example of the incredible inventiveness that exists in our country. These companies and all their employees actively shape our state and are already important pillars of our economy.“ Winfried Kretschmann, Prime Minister and patron of the state prize for young companies

“Baden-Württemberg has a very particular start-up culture. It is mainly opportunity founders who choose the path of self-employment. They start because they have a message, an idea, a mission. For them, self-employment is an instrument to make a difference! And the top 10 companies of the year 2016 are surely making a difference. With confident concepts and alternative problem solving solutions, new offers arise which intensify the competition and advance the economy in the state.” Dr. Axel Nawrath, Chairman of the Management Board of L-Bank

The state price for young companies was awarded for the eleventh time in 2016. Prime Minister Winfried Kretschmann is the patron of the competition, which is organised jointly by the state government and the L-Bank every two years. They look for economically successful companies from industry, trade, commerce, the service sector and the healthcare sector, as well as representative of freelance professions, who are located in Baden-Württemberg and who make an exemplary contribution to a sustainable society through their responsible entrepreneurial action. The award focuses on performance, modernity, and creativity of young entrepreneurs in Baden-Württemberg, as well as on their social and ecological commitment. Accepted are only companies which have been founded or acquired after January 1st, 2005. The state prize for young companies is one of the most highly endowed and most-participated entrepreneurial prizes in all of Germany. 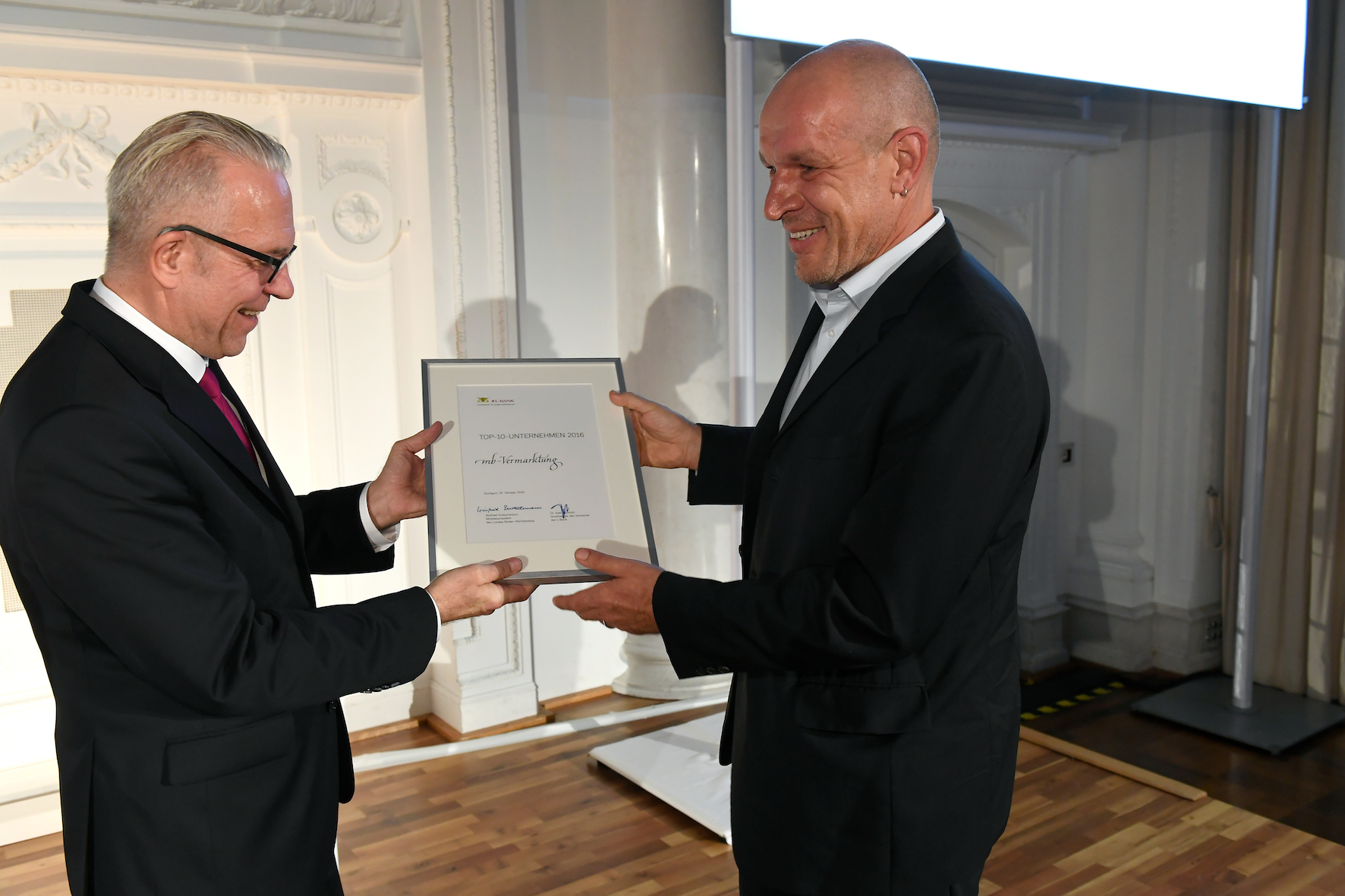 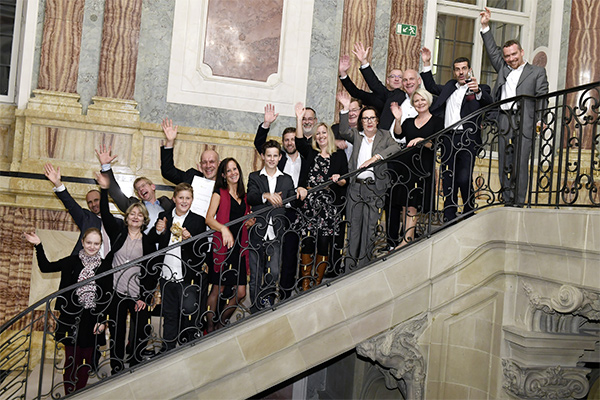 and clients, suppliers, family and friends cheering together.